PLEASE DO NOT SPRINKLE CONFETTI: 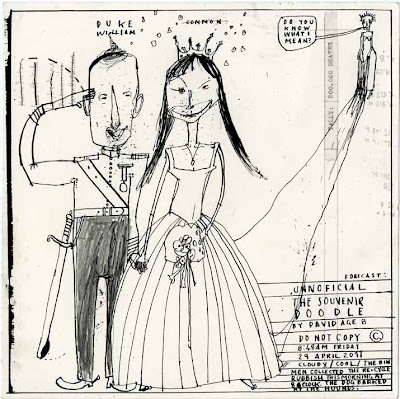 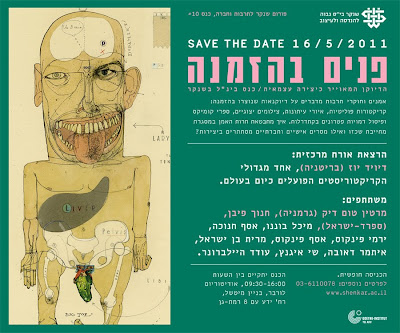 Easter Egg melts in the back of the car: 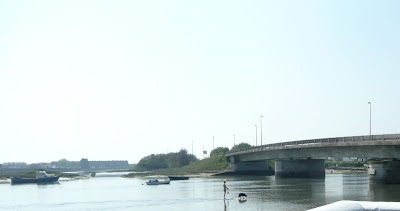 I took a sketch book to Shoreham By Sea, Sussex. I took Dexter. I took some snapshots. Didn't draw too much. Drank quite a lot. Easter. Very hot, very sunshine. Walked a lot paddled. Watched a couple of surf 'dudes' (her word not mine) paddle past a couple of times on the still water, they made it look easy, maybe it is. Their border collie dog running along the water's edge barking to them. Me and Dexter onlookers. I produced a sketch of my dog. I started to draw every individual pebble on the beach for about 40 seconds. Mid afternoon walked back from the beach across the bridge. Sat at a table by the river the pub was doing a good trade, but I struck lucky got the best table in the house. What do you do on a hot sunny Saturday afternoon with a pint of lager and Dexter for company. You watch the girl you saw earlier from the beach row past with her dog hitching a lift on her surfboard, and half the pub garden's occupants run forward with their mobile phones and grab a picture. Very seductive reason for living close to the waters edge. The girl her dog and companions arrive several minutes later at the pub. I quietly I think sketch a character in front of me and a table of lunching sea-siders beyond haven't been drawing long when the girl comes over to me and wants to know what I am drawing. Cor she says you've really got something dude, she is a very confident, self assured  girl, we chat for a few minutes she makes a fuss of Dexter, writes her name and her dogs name in my sketchbook before rejoining her friends for burger and chips. My ego massaged my lager tasting sweeter. I had been sketching Karl. Karl with a K German for Charles he tells me. Karl from Epsom next to the race course. His dog Titch. Karl and his girl friend had cycled 7 miles along the river with Titch a Jack Russell (from Battersea Dogs Home)running the seven miles alongside the two cyclists. Karl planned to put Titch on his back in a ruck sack for the return leg of the journey. Karl is a carpet layer. A carpet layer to the rich and famous, he talked of houses whose owners had original works of art hanging in their homes, Francis Bacon, Picasso......Karl revealed some of his clients identities to me (I can't remember the majority - the volume of alcohol with the heady mix of sun evaporating my tadpole brain cells.) Eric Clapton was one. Tiny Rowlands was another. He's dead, been dead for about 12 years Karl said. He only discovered that fact recently, when he noticed a cheque was signed: Mrs. Rowlands.
Tuesday lunchtime: Just seen the news that Poly Styrene has died, aged 53. Sad. My friend Kathy whose birthday was yesterday and who we have spent the week-end (apart from the Saturday afternoon) with was a big fan of X-Ray Spex.
Posted by David Hughes at 04:52 No comments: 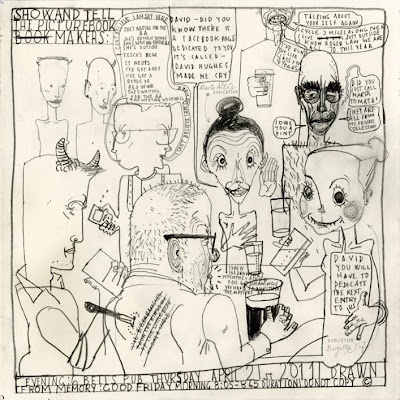 Last night sat in a Cambridge pub garden with the past present and future of talented inspirational image makers I have fulfilled a request to two shooting stars Birgitta Sif and Marta Altes (Marta's e should be wearing a hovering dash, but my keyboard can't cope) this crude sketch is dedicated to them:Marta's aside fools Hughes for five seconds-funny though.
9:15 am: Good Friday. Happy Easter Birgitta.
Posted by David Hughes at 01:04 3 comments: 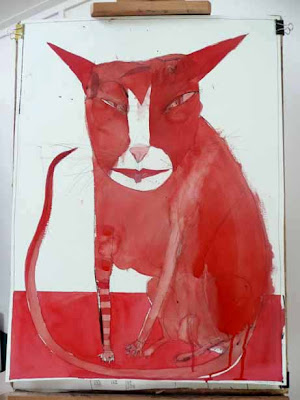 Start with the eye: When in doubt draw a cat. I once liked cats, I lived with a black and white cat for 16 years, he became my muse. When you have no idea when your brain is empty, or it thinks it is. Create tension. This is a fairly large watercolour. Probably the first watercolour painted in over six years. Inspired by another red cat by another artist like a tennis match, I think this one went into the net. I also attempted a blue cat but I failed. It was dangerously cartoon like it crossed the fine feline I wanted the cat to be sexy to be dark to be mysterious to be ............it was feeble. It was drawn on very expensive heavy paper. I obliterated it with two coats of gesso.
Posted by David Hughes at 03:07 2 comments: 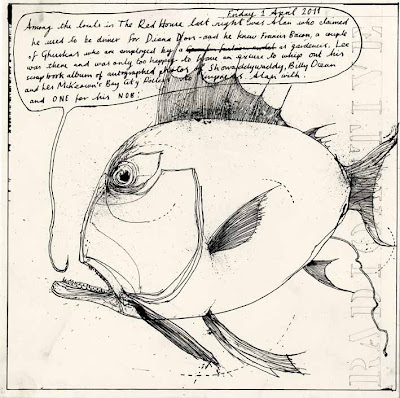