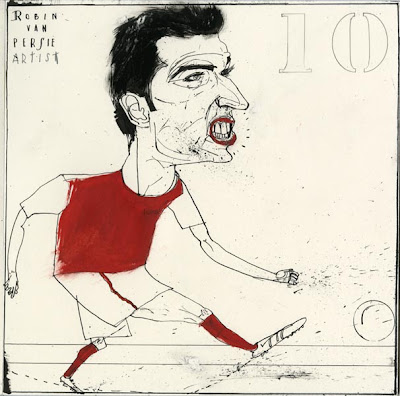 I last went to a Chelsea match at Stamford Bridge in 1971........I couldn't have predicted my next visit yesterday was going to be in the company of my chef chum MPW, sat in the directors box guest of the Chelsea Chairman and witnessing a classic contest in a 8 goal thriller and Arsenal coming out the victors after a second half comeback. Viva Van Persie. Bit different 40 years ago. 40 years! 50000 pornographic violent chanting skinheads looking for blood swaying as one standing massed tsunami gobbing their fury at Peter Houseman. And after the match away from The Shed End raiding the enemy stampeding in their 64-eyed steel capped DMs across the rooftops of parked Morris Marinas,leaving their impression on Austin Allegros sensing blood slinging their sharpened coins. Giving Old Bill something to do. Yesterday it was a taxi rank of massed chauffered latte swigging smoked windowed four by fours waiting in a shiny queue for their smartly dressed crew. Great match though.And the best goal of the lot was Theo Walcott's. He dribbles the ball in from the right wing falls over the ball stumbles through a group of Chelsea defenders having a natter as if at a day time creche, the ball half left behind but Theo manages to regain his balance at the same time as renegotiating a deal with the ball who joins him on his mesmerising path to glory and launches the sphere the missile past the leather capped Peter Cech bulging into the net. Genius.
Posted by David Hughes at 11:20 No comments: 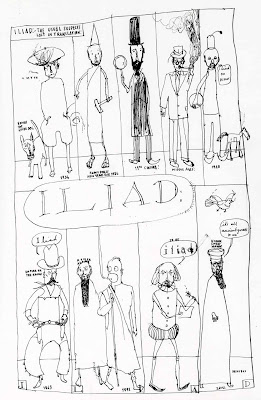 Holt.A twee small town in the county of Norfolk. Stuffed with estate agents. Stuffed with craft shops. Stuffed full of grandparents with children looking to pass the time in search of gift wrapped Giclee prints of oil paintings on canvas, signed HARRIS. Didn't hang about.
Hotel de Paris, Cromer. Norfolk. Rain. Regular Haddock and Chips. Irregular thoughts. Save The Cromer Crab. Caught a bit of BBC Radio 4 documentary on 70 years of Classic Comics. Moby Dick. Treasure Island.  The Iliad. Didn't hear all of it-found a parking space. Time was tight.
Dexter had a haircut. He's up for anything now.
Going for a pow-wow, for a pint at The Dove to smoke the peace..
Posted by David Hughes at 08:02 2 comments: 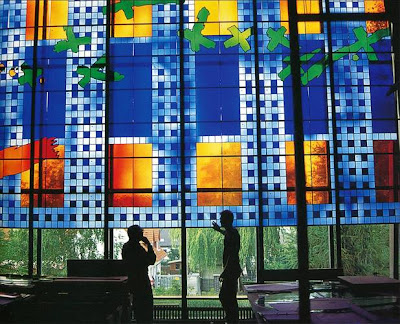 6.50am Got up. Just. Made a cup of tea. Fantasied of giving up. Stopping. This. That. Drawing. Illustration. Especially illustration. Switched on the laptop. Checked the email. No response. Half looked at TV Breakfast News. I suppose I mean with one eye like Cyclops. Swop. One Israeli for 1000 Palestinians. Switched off. Went to iplayer. Nothing worth a view. Then Clicked on Brian Clarke An Artist Apart. Gobsmacking. Inspirational. Breathtaking. The genuine thing. Leonardo Da Vinci.
Now back to the Iliad.
Greek Unorthodox.I perpetuate the artistic lie. Back to the mediocre.
Posted by David Hughes at 00:14 No comments: 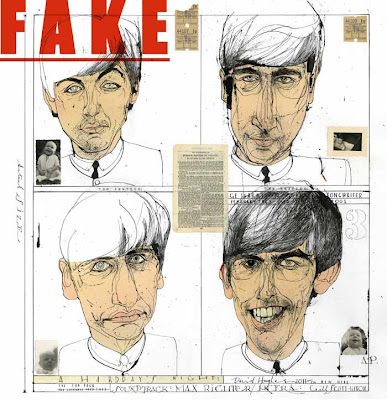 We waited for hours. A surge. I was shuvved violently against the perfumed Wilfred Brambell. George winked and he was gone. Twickenham Film Studios a long time ago.
Posted by David Hughes at 14:57 No comments: 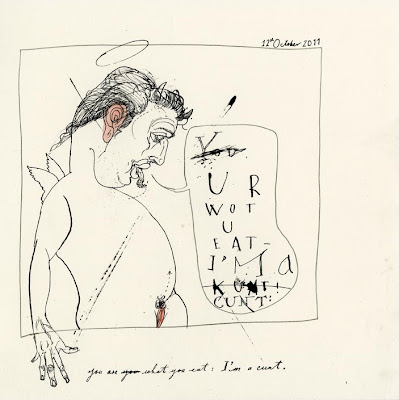 Can't tell a joke: Take two.....
Think. Idea. Draw. Scan. Post. Pocket picked. Ideas, can't copyright an idea can you? Depressing. Hands off. Stop this nonsense. These drawings. These childish self conscious expressions of ink. Normal service. Sleep.
60 is the new - 40. Fuck off. Golf. That's it dedicate myself to reducing the handicap.
Invite to Vienna. I said how good is that? Wonderful he replied. An offer of 75% less than the previous project. Absurdly high expectations he said.
Another publisher sent a royalty statement for the period January 2011-June 2011 they sold eleven books. Just the £4230.20 to break even. I could do that in an afternoon sell eleven Hot Dogs. Why don't you? Arsehole. Because it is by Sandy Turner and Sandy Turner is dead. The price of the airmail statement cost more than the Cool Cat Hot Dog royalties of eleven sales.
I sold Hot Dogs at The Gaumont Cinema. Richmond. Tore in half admit 1 tickets, skewered their other half on a spike. Ushered couples to their viewing positions,shone a torch on their row number. I sold choc ices in the interval. Short changed customers in the dark. Saw Charlie Bubbles. Whom The Gods Wish To Destroy. Chitty Chitty Bang Bang 63 times. One couple who followed my torch-beam to their seat in the stalls was Franco Nero and Vanessa Redgrave. And another was Nicol Williamson.
Posted by David Hughes at 01:43 2 comments: 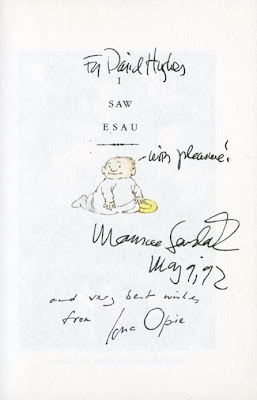 In 1992 I was invited to meet Sendak along with other notable illustrators including if I can remember correctly, Angela Barrett, Helen Oxenbury, John Burningham and Shirley Hughes. I had driven down from Manchester with Jill Barton, I missed the cup final to go. It was for a meal hosted by Walker Books in his honour at The Ivy restaurant. He was in London to promote I Saw Esau edited by Iona & Charles Opie, beautifully designed by Amelia Edwards and decorated by his illustrations. It was all very polite and reverential until I got up from the long table and I produced my copy of Where The Wild Things Are for him to sign and then it suddenly became more relaxed and every one else also produced various Sendak books for him to sign. As he left at the end he gave me some sound advice. "Don't let the bastard's fuck you up!"
Posted by David Hughes at 07:44 2 comments: 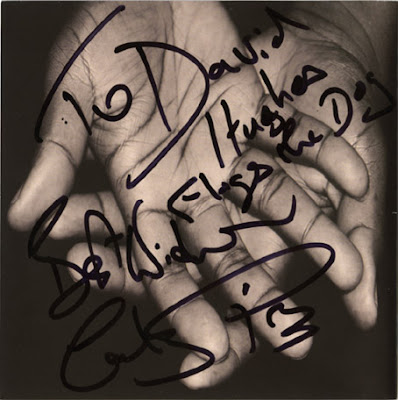 I might play some Miles Davis I might listen to some jazz influenced tracks but last night I witnessed a breathtaking performance by Courtney Pine and his band featuring a mesmerising pianist Zoe Rahman. Artists at play. The pity there wasn't a larger audience to witness his genuinely human presence his conversation his virtuoso playing of a bass clarinet. Genius. I said I would do a drawing. I did. And you know what? It's crap.
Posted by David Hughes at 01:09 No comments: 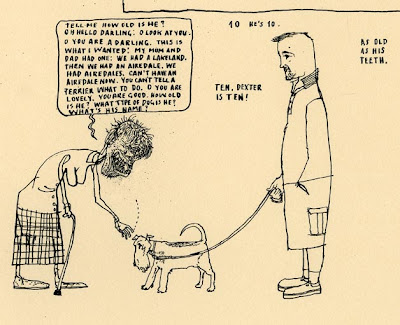 Bert Jansch, 67 has died. Dexter attracts the freaks. The market place draws them in. Earwigs round an ants nest. I got an offer today.
Posted by David Hughes at 13:38 1 comment: 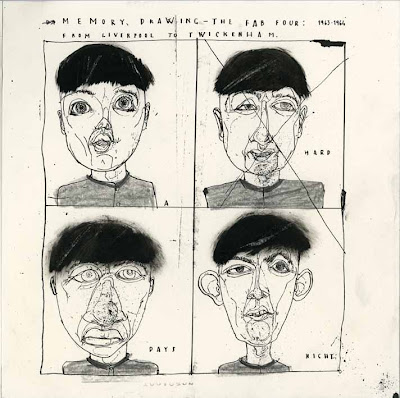 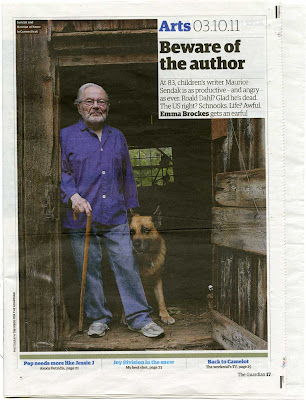 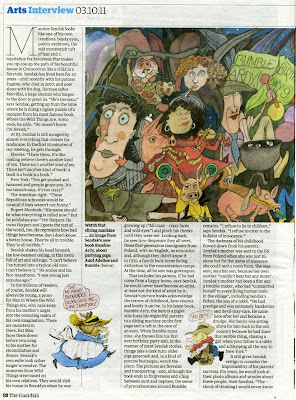 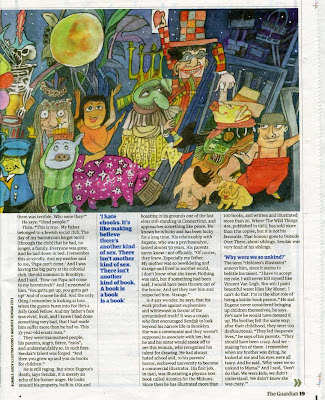 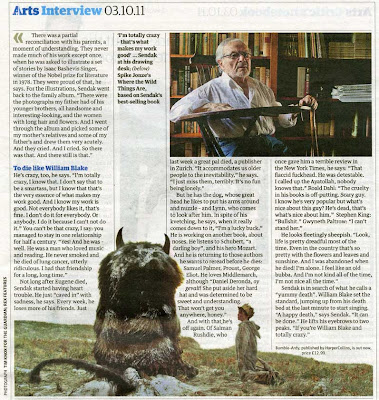 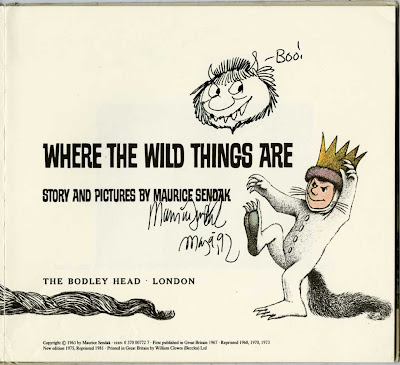 Today's Guardian Newspaper, interview with Maurice Sendak. Worth a read. Honest. Funny. Shame there ain't more. I think it wasn't until I was in my first year Foundation course that I was aware of Sendak. 16 or 17 years old I saw a copy of Where The Wild Things Are, it belonged to Jonathan Briant. Of course later it became one of the influences on my work.
SOUNDTRACK: MAX RICHTER - INFRA
Posted by David Hughes at 03:06 5 comments: